Switzerland has ranked first in the Global Innovation Index every year from 2011-2021. In the area of biotech patents, it has the highest market coverage and an exceptionally high technology relevance. An important factor contributing to its consistent success is the extensive cooperation and co-authorship of Swiss-based inventors with colleagues at international organizations, universities and research institutes based abroad. Such collaborations mean that Swiss-based inventors are credited on numerous high-ranking “key” biotech patents. 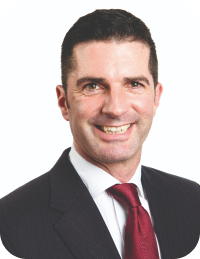 The marked disparity between the relatively small biotech IP portfolio originating from Swiss-based inventors and its substantially greater competitive impact*** (the product of market coverage* and technology relevance**) has been outlined in this report in recent years and is summarized in Figures 1a and 1b.

For biotech patents, Switzerland has the highest market coverage in the world (a measure of the number of countries for which protection has been obtained and their relative market importance). Although its portfolio size is rather modest, in line with the small size of the country, it has remarkably high technology relevance (a measure of the rate of citations of patents within a given technical area). This is shown in Figure 1b:

Developments in biotech IP over time

The biotech IP landscape for Switzerland and worldwide was examined, with patent families subdivided into 5-year segments by application year. The ratio of top-rated patents with Swiss-domiciled inventors to that of all biotech patents worldwide has risen consistently for the past 20 years. This is shown in Figure 2.

Biotech products and areas of application

A closer look at the products and areas of application of the Swiss-origin biotech patent portfolio shows that these largely mirror their worldwide counterparts, see Figures 3a and 3b. Major areas of application include: “red” biotech – pharmaceuticals/healthcare; “white” biotech – industrial manufacture; “green” biotech - plant science; “yellow” biotech – food; further applications include microfluidics and analytical techniques.

The well-above average impact of biotech patents with inventors domiciled in Switzerland compares favorably with that of several larger countries, raising the question of what the reasons for this effect might be.

An analysis of the owners of biotech patents of Swiss origin reveals a distribution of players including multinational companies with a biotechnology focus (which have correspondingly large portfolios and corresponding IP asset metrics), Swiss universities/research institutes, and smaller pharmaceutical/biotech companies and startups. Patent co-ownership issues within this data set are especially illuminating. A preliminary analysis of co-owned patents, those with two or more (corporate or academic/institutional) assignees, reveals an interesting pattern of international cooperation.

Particularly noticeable are a number of extremely high-impact (“key”) biotech patents (co-)invented by authors domiciled in Switzerland, which have apparently benefited from development by and cooperation between organizations, both corporate and academic, in particular in the United States and Japan. This finding is echoed in the Global Innovation Index rankings for Switzerland which include a worldwide second place (GII 2021) in university-industry collaborations, and is a possible factor favorably influencing revenue from intellectual property (CH: worldwide 1st place in the 2021 GII).

Focusing upon the actual technical content of some of these top-rated co-owned patents reveals a veritable hall of fame of advances in biotechnology in recent years. The highest-ranking patents in biotechnology relate to CRISPR/CAS. These have not been included in the analysis, as they are “off-the-scale” in terms of impact and thus less suited as examples for a comparative study. Applications, primarily in the area of therapeutic antibodies within oncology include: multi-specific antibodies; antibodies in connection with immune checkpoint targets such as TIM-3, T-cell immunoglobulin and mucin domain 3; and PD-1, programmed cell-death protein 1; CD20 and CD22 therapies as well as chimeric antigen receptors (CAR) T-cell therapies. Schematic “impact trajectories” of selected, representative highly ranked rated patents can be seen in Figure 4. 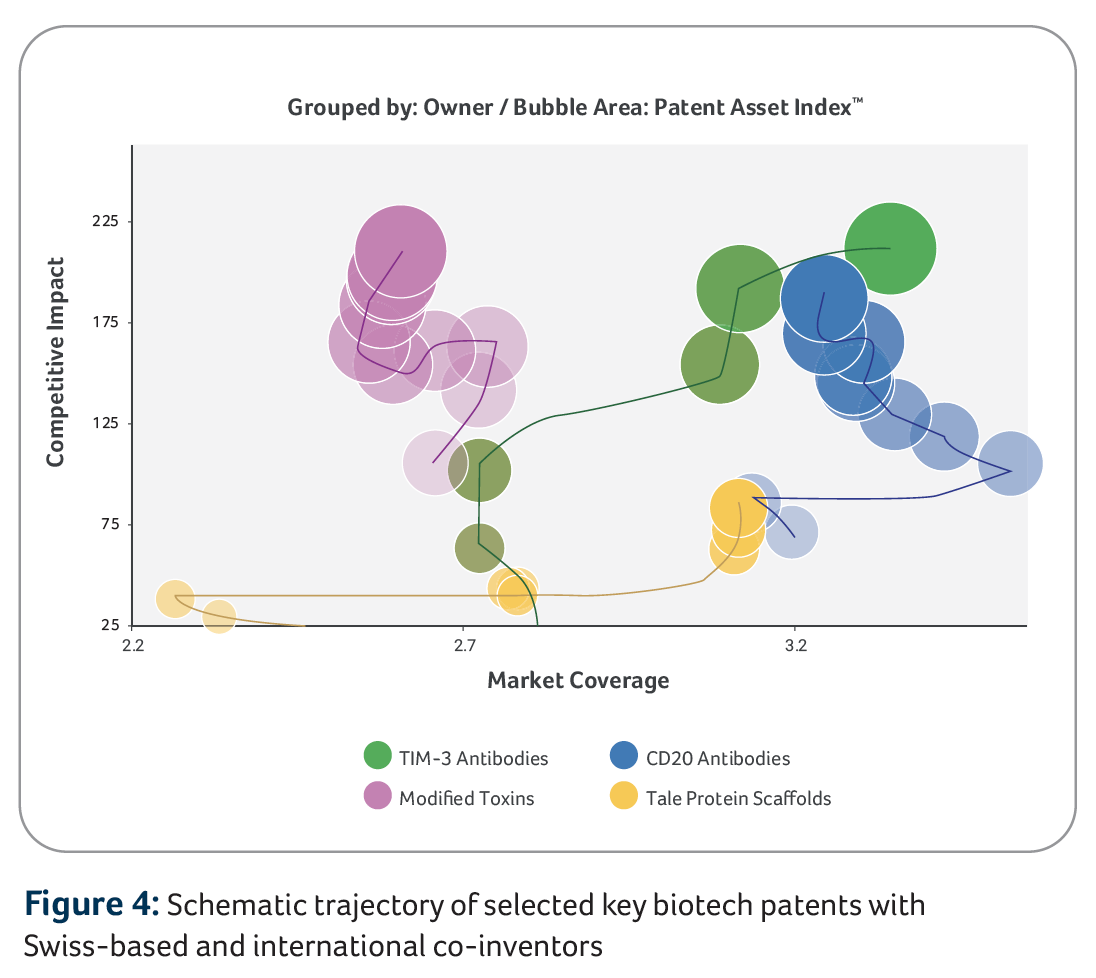 Of note are the positive overall trends over time, with an impressive growth of the key metrics, as well as the very high competitive impact (technology relevance x market coverage) which shows end-points in the 50-200 range for these examples - far higher than the average. This is expected as a function of increased rates of citation, which are normalized for biotech area and age of application. Notable also is the change in market coverage, as grants occur in successive jurisdictions/countries or as patents lapse in certain markets over time.

Key biotech patents show high to very high impact compared with “standard” (average-rated) biotech patents and with patented technology from other fields/in general. Some significant, key-technology and extremely highly ranked biotech patents seem to have arisen from international cooperation between commercial entities and academic research institutes. This in turn has resulted in patent co-ownership between these entities. There are thus many inventors based in Switzerland who appear as authors/co-authors in several selected key biotech patents.

Note: The patent data were processed with the software PatentSight, based on patent families. A patent family condenses all patent documents relating to a specific invention, as defined by an initial priority application. Only active patent families, i.e. those in force or pending at a given point in time, are included in the evaluation. The country of origin for patents is determined via the inventor’s addresses provided in the patent applications.