The global biotechnology industry in 2019 was again performing well, irrespective of the macroeconomic and external environment: the global economy is showing resilience in the face of elevated geopolitical, trade and tariff concerns. IPOs were still “en vogue” and a record level of M&A activities could be noted at the global level, primarily driven by the need for growth of some of the large biopharmaceutical players. 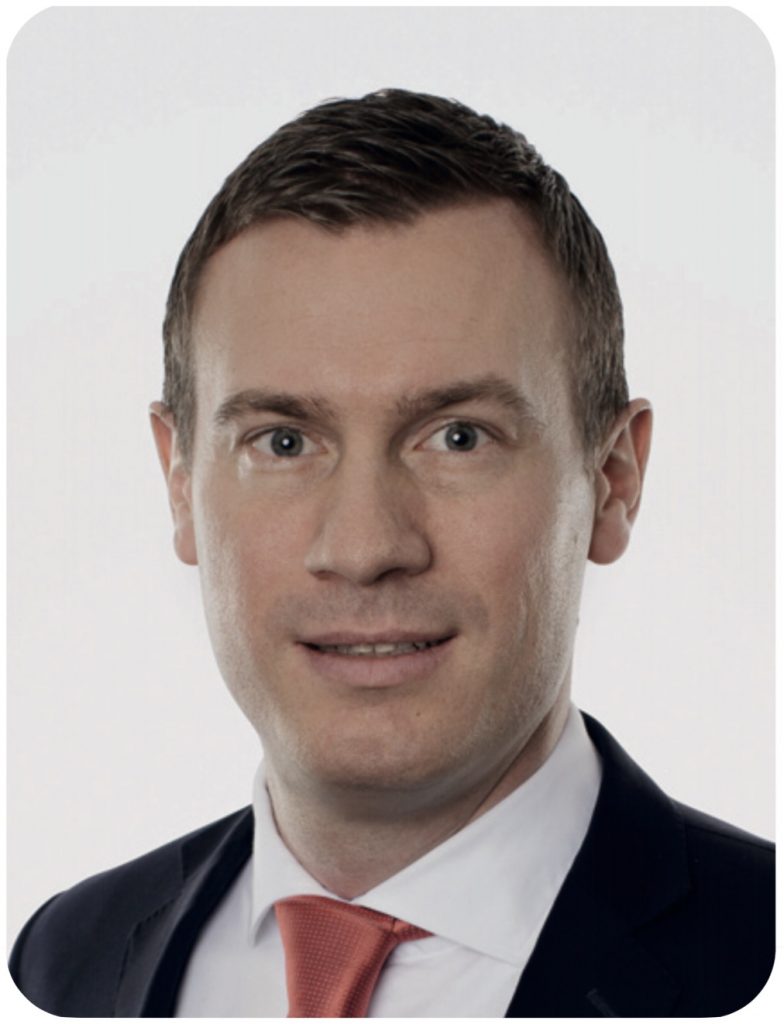 The Swiss biotech industry generated revenues of almost CHF 4.8 billion, compared to CHF 4.0 billion in 2018. This boost in revenues was mainly driven by favorable collaboration and licensing agreements for AC Immune, Basilea and CRISPR, as well as higher revenues for those biotechs already selling products/services in the market.

Financing reported a year which was clearly below the previous two “record years”, with a total CHF 1.2 billion. The split between public and private companies was almost even, with the “better end” for the public companies. However, there was not a single IPO of a Swiss biotech company in 2019.
Of the money collected by the public entities, the vast majority went to CRISPR Therapeutics AG with an equity round of US$ 315 million, as well as an ATM program of another CHF 121 million. Other public companies which were able to get fresh money included AC Immune and ObsEva through debt and/or equity instruments, as well as Auris Medical and Biocartis (see Table 1). 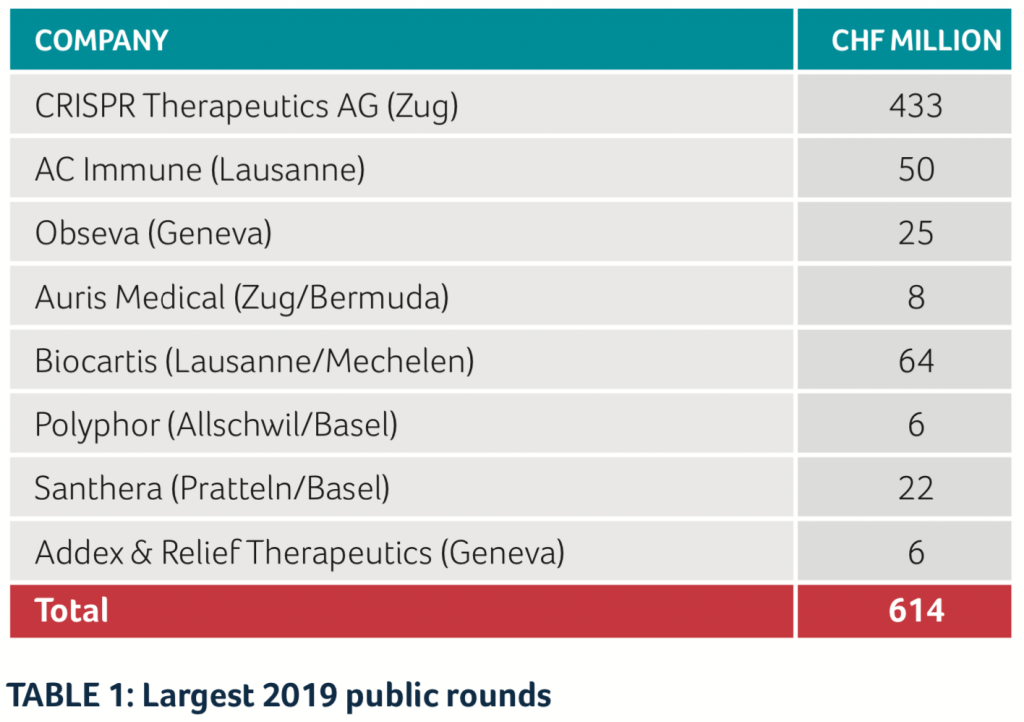 Among the private biotech companies in Switzerland, the largest financing rounds were achieved by ADC Therapeutics, with CHF 101 million in two rounds, and SOPHiA GENETICS with CHF 76 million. ADC Therapeutics was also a “hot IPO candidate” but decided shortly before the planned IPO date to instead do another financing round with private investors. (See Table 2) 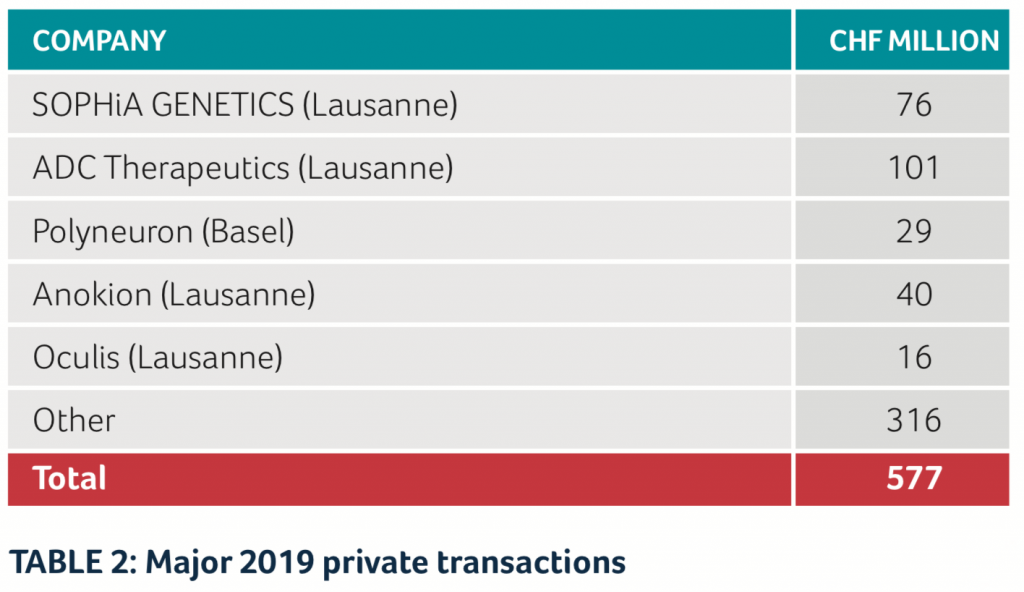 Several Swiss biotech companies were acquired in 2019 by either (big) pharma or other biotech companies. The following brief snapshot lists the most prominent transactions (see Table 3):
SimplicityBio, an early-stage healthcare AI company based in Lausanne, has been acquired by US-based Precision for Medicine, the first biomarker-driven clinical development organization. 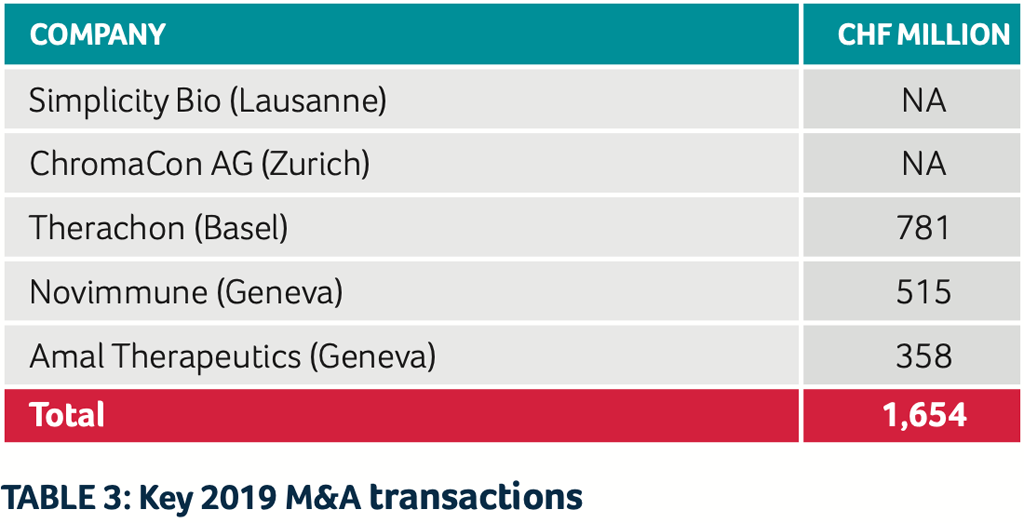 But Swiss biotechs were also active as acquirers of other companies. For example, Lausanne based Anokion SA found an acquisition target in the US (Kanyos Biotech).
And it was not just on the financing front that the Swiss biotech sector recorded a lot of successful events. In the area of collaborations and licensing arrangements, several successful new partnerships were also established in 2019 (See Table 4). 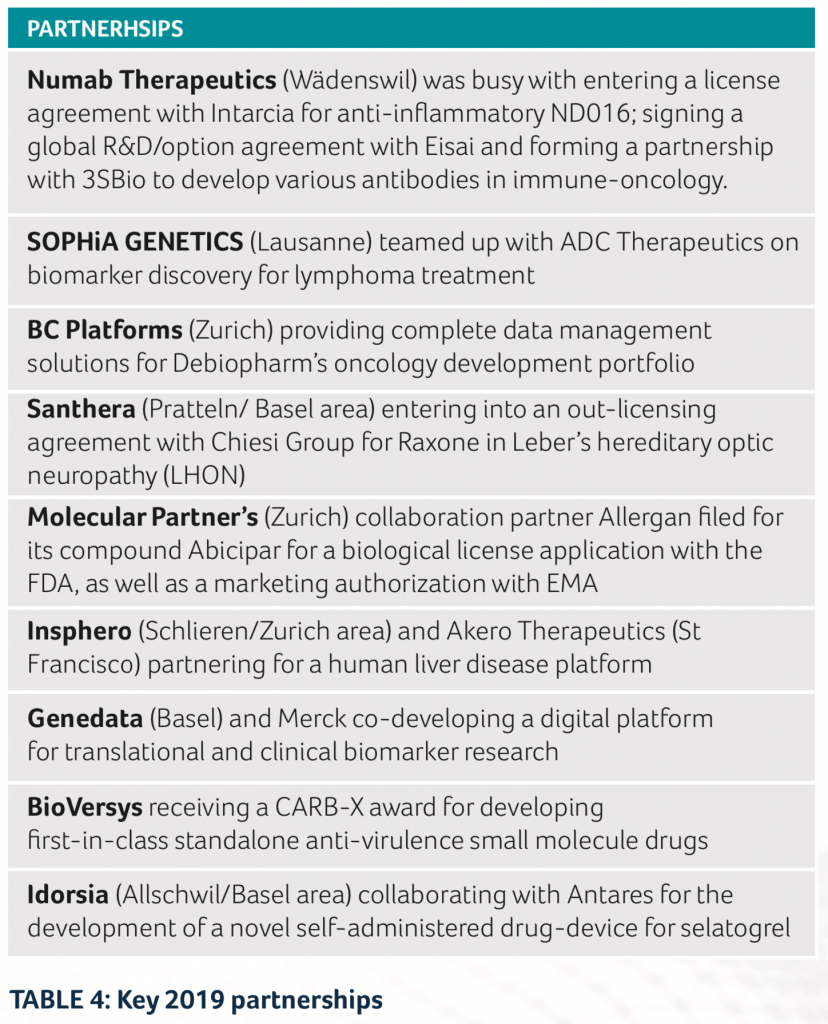 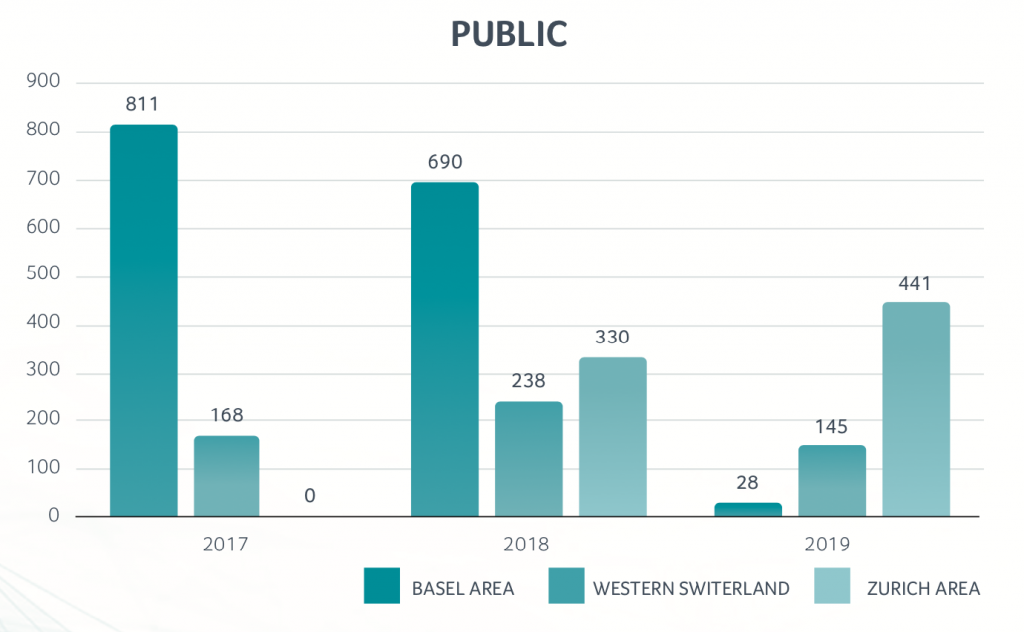 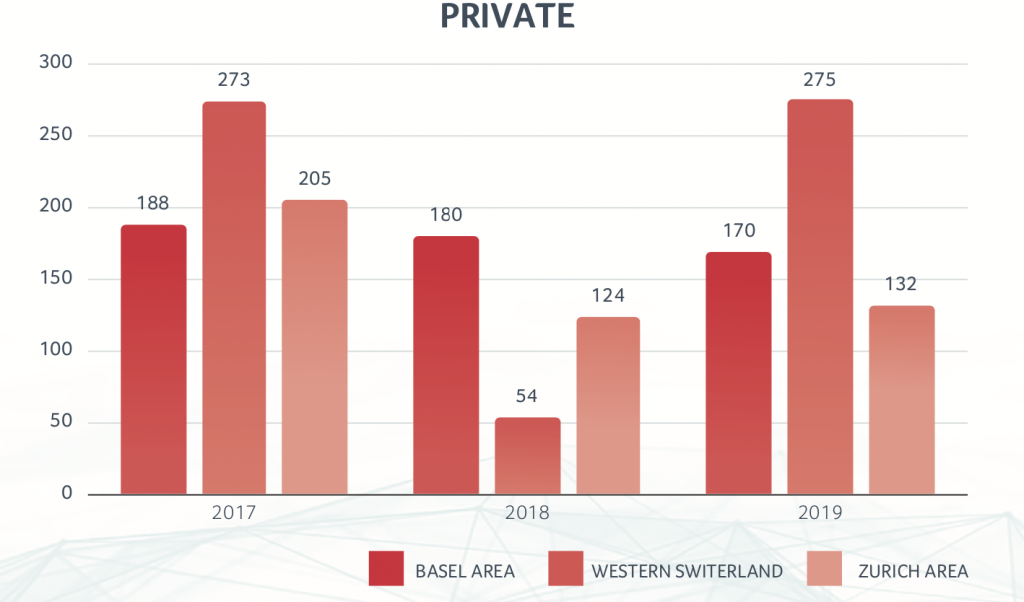 The global biotechnology industry saw fewer approvals by the FDA (48 compared with 59 in 2018) and a reduction in European
approvals by EMA (66 compared with 84 in 2018). Swissmedic itself approved 29 new drugs in 2019, which was two fewer than the 31 approvals for innovative new drugs in 2018.
In early October 2019, the FDA approved BEOVU (treatment for neovascular wet Age-related Macular Degeneration (AMD)). The origin for this new drug was initially developed by the former biotech company ESBATech AG (based in Schlieren), which was acquired back in 2009 by Alcon, before Alcon itself became part of Novartis.
Nevertheless, there were also some setbacks to be noted during 2019. For example, ObsEva reported that its Nolasiban implant 4 study did not meet the primary endpoint.
Several Swiss biotech companies also received awards in 2019:

All of these awards are another clear indication of the strength
of the Swiss biotech sector and a reflection of all of the significant progress made over the past years.

Newron Valuation Report "Back to pivotal"

Cosmo Valuation Report "Back to the roots"